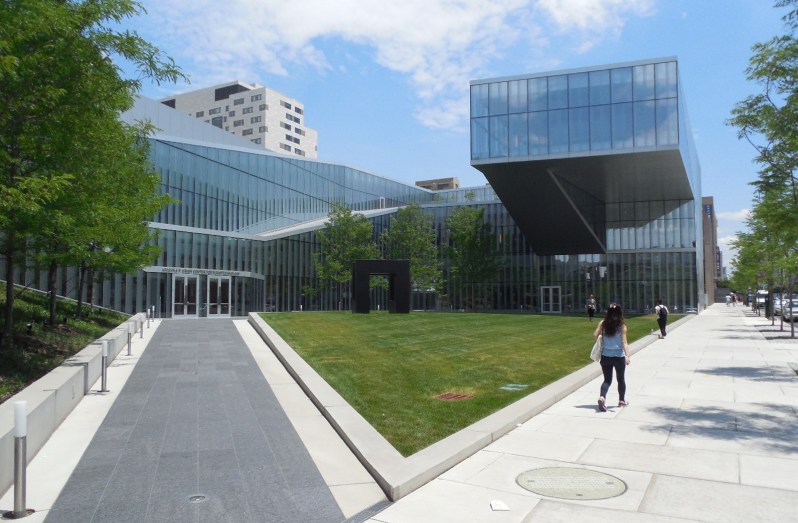 University of Pennsylvania has added a new gateway building on the eastern edge of campus known as the Krishna P. Singh Center for Nanotechnology. This 78,000 SF $91.5 million dollar research tour-de-force is designed by the Manhattan firm of Weiss/Manfredi and shepherded from idea to reality by the school’s Dean Eduardo Glandt. The gateway is formed at the street level by a pocket park created by the building’s set back from the street and three dimensionally by the transparent, dynamic geometries that open the engineering department to the city. In fact one of Dean Glandt’s stated objectives was to make science visible to the university and community instead of being hidden in closed and opaque buildings.

There are background buildings that fit contextually into place and there are signature buildings designed to make a statement. The Singh Center with its cantilevered form, transparent frit patterned glass curtain wall and intersecting geometric forms creates a dynamic signature building that fits into the fabric of the urban grid. Yet the building is unique enough that the Inquirer’s architectural critic named it the best Philadelphia building since the Barnes. Some of the unique features include openings in the landscape plaza allow light to filter into the lower levels of the building where the most vibration sensitive equipment is placed on bedrock. Orange glass walls separate the labs from the day-lit filled transparent corridors allowing for daylight into the labs while projecting this orange glow at night into the courtyard. A seemingly obligatory – these days, roof top garden allows for views to the campus to the west.

Bottom Line: The University has taken a page out of the business playbook by using design to differentiate their product, in effect branding their departments, colleges and campuses. And just as businesses compete with one another and use design to differentiate their products: think Braun, Beats and Bose. Colleges from Ivy League private schools to Land Grant public institutions are using high-design state-of-art facilities to recruit research staff, attract students, and promote their departments. As in all arms races, this ratchets up the design, and cost for all colleges across the board perpetuating the arms race. 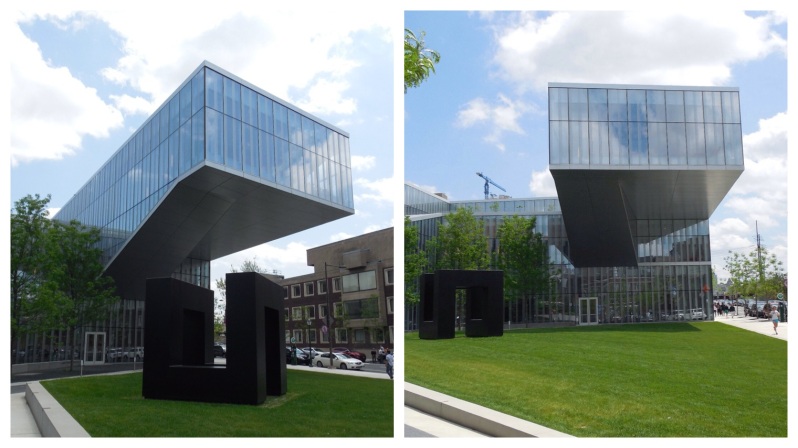 Certainly universities have the right to spend their money, and their donor’s money however they choose. But the Nano-tech Laboratory is built with both private and public money. Singh, the named donor gave $20 million, the state of Pennsylvania $25 million and the remaining funds from private donors and Penn. At $1,200 per SF, almost 35% higher than the cost of comparable nanotechnology laboratory structures there was no expense spared in the structure. The single loaded extra wide corridors, cantilevered ‘event’ room and an ‘L’ shaped plan with complex geometries all raise the cost of the building. Michael Manfredi the labs architect stated the “usual lab maze of dim hallways lined with closed doors isn’t enough in today’s innovation-driven and collaborative research environment”, he’s right. But it’s not a license for an unlimited budget at the taxpayers’ expense. It’s one thing if the building is good, and the university has a market position, pricing advantage, and branding story that Penn indeed has; However it’s another story if it’s a poorly executed building at a public university, see my post on Penn State’s Nano-Technology Laboratory that was a white elephant building when it opened and will end up saddling the university with an enormously expensive building to maintain over time.

My Tweets
Follow Design & the Bottom Line on WordPress.com

Beautifully designed, built and maintained shopping environment @citycreekcenter
Jenga Architecture - why pixelated towers, rotated cubes and stratified cliffs are all the rage. https://designthebottomline.com/2023/01/07/jenga-architecture/
Expect to see more magenta in 2023
Water jet cutting of custom canopies destined for Seattle and fabricated in Indianapolis by @bomarindustries #metalfabrication #waterjetcutting
Excited to share a completed mock-up of custom canopies designed for Simon’s Northgate Station in Seattle. Fabrication by Bo-Mar Industries Indianapolis @bomarindustries #metalfabrication #waterjetcutting
A Random Walk through Scottsdale Fashion Square
Apparently electrical vehicle manufacturers believe that regional malls are a perfect venue to showcase their cars new technology @lucidmotors @polestarcars @teslamotors
Amazing design of the Lucid Motors show ~ Modern and elegant with museum types displays that explain the Tech @lucidmotors
In-N-Out burger 🍔 with the quality fresh fries
King of Prussia is ready for the holiday with this magical carousel. #mall #blackfriday #kopmall
Wow had to get out the parallel bar and french curve to work on this mall entry Reno rendering …and Millennials who are used to their 3D modeling software ask what’s a French curve?
City Market opened in Indianapolis in 1886 featuring cast iron columns and wrought iron handrails.
My collection of iPhone boxes iPhone 6, iPhone 10, iPhone 14
In our interconnected world an iPhone ships from ZhengZhou China to Incheon Korea to Anchorage to Louisville to Indianapolis. Total of 9,000 miles -all in THREE days. It’s the definition of just in time retail sans any warehouse or inventories.
A 1965 two story JCPenney building at Northgate Station built in 1965 has been demolished and the concrete structure crushed into 22,000 tons of material that will be used as sub-base and fill throughout the site’s redevelopment
Wrigley building a beautiful 1920s glazed terra-cotta building by Graham and Post architects
St Regis Tower by Studio Gang …nice curves
Rainer Square in Seattle has all the pastiche of a bad student project: pimpled digits (in chrome) stepped ziggurats, and totally arbitrary corner carve outs. What was NBBJ thinking? #rainersquaretower #NBBJdesign